A brief History of Hay-on-Wye

The small Marches town of Hay-on-Wye is the northernmost point of the Brecon Beacons National Park and stands on the southern side of the River Wye. Across the river to the north are the green hills of Radnorshire, to the south and west lies the glorious range of the Black Mountains, to the east is the Golden Valley, part of the cultivated farmlands Herefordshire. Hay is situated in some of the most varied and beautiful countryside the British Isles have to offer. 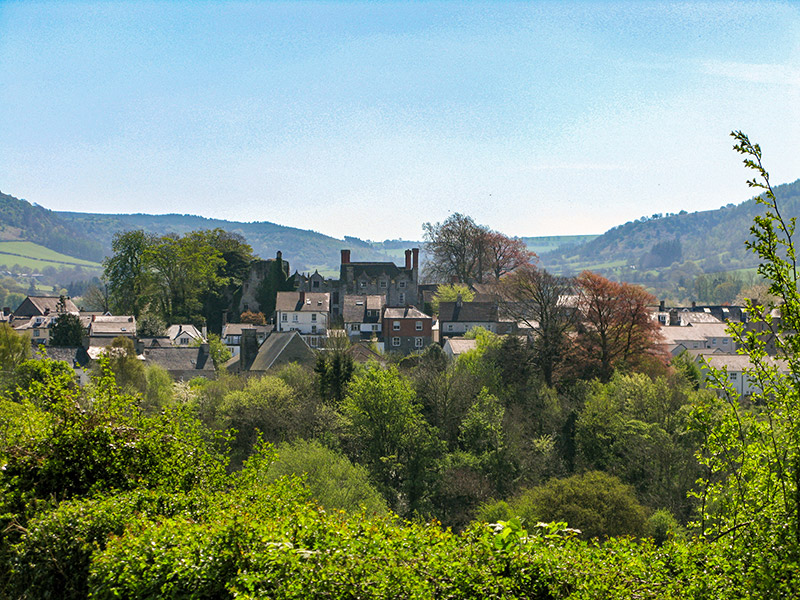 In local terms, the town was known as 'The Hay', the name deriving from Norman origin, Hay or Haie, meaning a fenced or hedged enclosure. 'Y-Gelli', the Welsh form, means 'Grove'. In Norman times, for administration purposes, it was divided into English Hay and Welsh Hay. The town was English Hay and the south and west area of countryside, the Welsh Hay. In modern times Hay is known throughout the world as 'The Town of Books'.

Anyone strolling around the town cannot fail to notice the gateway of the Norman castle which towers over the narrow streets lying beneath its walls. This castle replaces the earlier and much smaller castle built on an artificial mound close to Hay's parish church in St Mary's Road. This ancient mound can still be seen.

The history of the town and the castle are inextricably bound together since William de Breos II, one of the most infamously treacherous of the Norman Marcher Lords, built the present castle c.1200.

According to legend, the castle was rebuilt in one night by the wife of William de Breos, Maud de St Valery (also known as Moll Wallbee), carrying the stones in her apron.

William and his wife had the misfortune to fall foul of King John who took vengeance by imprisoning Maud and her eldest son. It is reported that, in 1211, they were starved to death by being walled up alive, probably at Windsor, but possibly at Corfe. William fled to France where he died in poverty in Normandy in 1213. His body was taken to Paris and buried in the Abbey at St. Victor.

The castle and town, during nearly eight hundred years, have suffered equally at the hands of Welsh patriots, English lords and reigning monarchs.

In 1231 the castle was burnt down by Prince Llewelyn ap Ioweth and then rebuilt by Henry III c. 1233 before being restored to the de Breos family.

Simon de Montfort, Earl of Leicester, reduced the castle in 1265 during the Barons uprising against the king. In 1322 the castle was captured by Edward II's forces and confiscated from the de Bohum family, then lords of the manor. In 1353 the town and castle were, once again, destroyed by fire during the rebellion of Owain Glyndwr and the castle was declared to be 'in a ruinous state'. 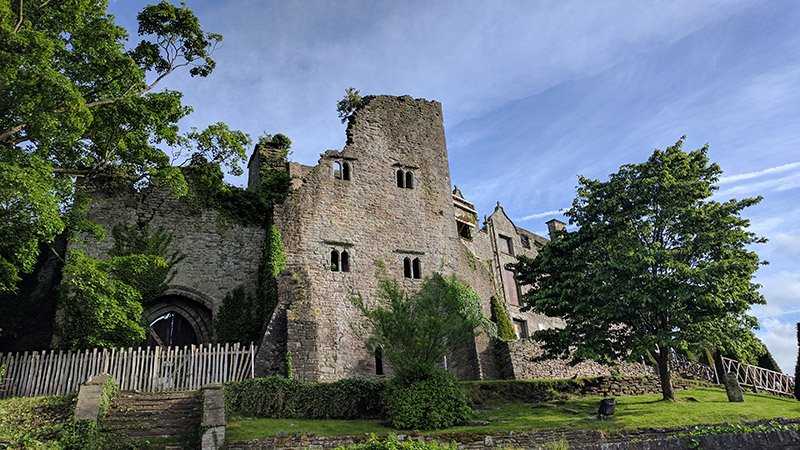 Sometime between 1600 and 1650 the Jacobean mansion, set within the Norman walls, was built under the ownership of the Gwynn family of Trecastle but this too fell into disrepair. The 18th and 19th centuries saw a variety of tenants leasing the castle.

During Victorian times it became the residence for the vicars of Hay and Francis Kilvert, curate of Clyro and Victorian diarist, was a frequent visitor there.

In 1971 the castle became the property of Mr Richard Booth, bookseller, during which time the castle, once again, suffered from fire in 1977 (it had also happened in 1939). From Castle Square, in the centre of town, a clear view can be seen of the 13th/14th century doorway and the flight of steps where the jurors for the manorial courts were sworn in.

The medieval town walls were erected in 1236 when a grant was received to fortify the town. There is little trace left of the walls, the three gates or the postern gate for foot passengers. Remains of the ancient wall can be seen when approaching the town on the B4350, Clifford road, occupying the ridge of high ground to the left of Newport Street. Newport, a corruption of Nyporth, meaning 'Water Gate', so called because of the position of the east gate leading down to the river. The walls appear to have continued westward along the high bank of the River Wye and then eastwards towards Castle Street and the Western Gate. It is probable that the third gate occupied a site near the Old Black Lion in Lion Street.

Many of the buildings have been 'rendered', thus hiding their once exposed timber and plaster exteriors.

There are known to have been at least thirty-four public houses in the town at one time. The Three Tuns, in Broad Street, is the oldest and since a recent fire and subsequent complete refurbishment continues. This 16th Century building still has its horse mounting block outside. The colonnaded Buttermarket was erected in 1833 on the site of the Old Market House. There was also a Cheese Market and a China Market, although the latter was just an open space, as well as the usual livestock markets.

The Tramway was the forerunner of the railway which ran from Brecon to Hay and on to Clifford and Kington. This Tramway was built in the 18th Century as a means of transporting coal more cheaply from the Abergavenny and Brecon Canal. The tram was limited to six carriages and entirely horse-drawn. 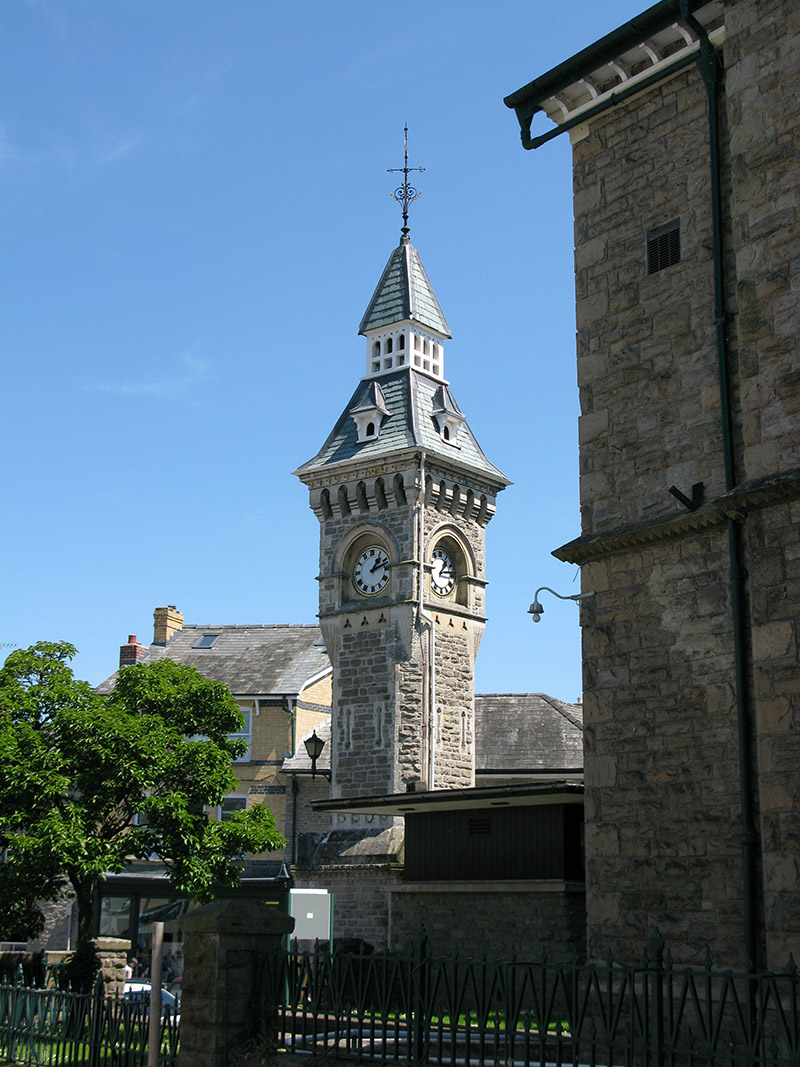 Passengers were permitted, paying 6d (2.5p) for six miles. Two contractors supplied the horses, William Bridgewater, stationed at Glasbury and Benjamin Trusted at Eardisley. The horses were probably changed at Glasbury where the stables at Llywnaubach Lodge have now been incorporated into the hotel complex. An example of the iron wheel and part of the track can be seen in Hay Library.