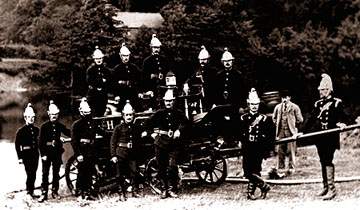 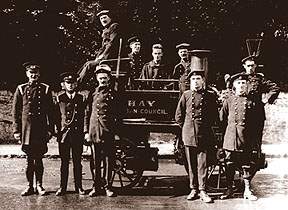 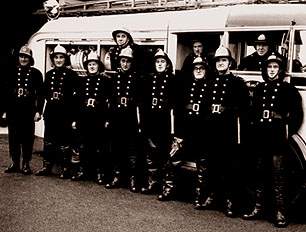 Pictures kindly provided by Mr Edgar Evans, of Hay-on-Wye. A magnificent collection of some 40 old Fire-Service photographs can be seen at Hay Fire Station, with the permission of the officer in charge.

The Family of Firefighters

DURING the holding at Builth Wells on Friday of the Fire Brigade's fifth annual pump competition. Fire woman, Sally Evans, No 0101, of Hay-on-Wye, received the Fire Brigade Long Service and Good Conduct Medal as a reward for 20½ years' service attached to the Hay station. County Councillor W. J. G. Evans, chairman of the Brecon and Radnor, Joint Fire Brigade committee, made the presentation.

The occasion makes yet another link in the chain that connects the Evans family of Hay with the Fire service and the story starts way back in the latter part of the last century when Mr C. T. Evans, a Hay builder and decorator, was captain of the old Volunteer Brigade working a horse-drawn manual engine; when this later gave way to a steamer, still horse drawn, Captain Evans personally collected 110 towards the cost of the new engine which was christened 'Firefly' with a bottle of champagne by a Mrs Wood, of Gwernyfed Park, Three Cocks. Captain Evans's place was in due course taken by his son, Edgar, who was a local firefighter from 1892 to 1943, earning the Long Service Medal with two bars. Next came Captain Edgar's two sons: Eric, who served from 1921 to 1964 and for the last 19 years of this period was sub officer-in-charge, gaining the Queen's Medal and Long Service Medal, and his brother Rex, recently retired after 25 years service from the office of fireman mechanic at Llandrindod Wells Fire Station.

The Fire Brigade was formed in Hay under the old local government board in 1892 and was promoted chiefly by C. T. Evans and assisted by Captain E. H. Cheese, a solicitor in Broad Street, Hay (who some ten years later was to become a partner with Major H. Rowse Armstrong, of the infamous murder trial). The brigades' first fire call was at Mr Thomas Wallis's oil stores attached to his grocery and ironmongery business in Broad Street, the site of the present Cafe Royal; the fire also damaged the adjacent Black Swan Inn stables, and the cause of the conflagration was stated to be 'a lad throwing down a lighted match'.

On a personal note...

C. T. Evans, founder of Hay Fire Service in 1892 had two sons, Edgar and Fred Evans. Edgar Evans continued his life in Hay-on-Wye and with the fire service, and died in Hay. Fred Evans, however, emmigrated to Australia in the 1920's, and to the knowledge of his great-grandson Edgar Evans, who sadly passed away recently, has never been heard from since. Does ANYONE know of his family's whereabouts ? If anyone can help, wherever you may be on the planet Earth, can you please contact us.