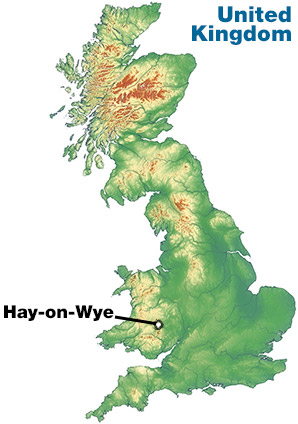 Hay-on-Wye lies on the Welsh side of the Welsh/English Border in the County of POWYS, Wales. Although as far as the Royal Mail is concerned, it is better, apparently, to use the County of HEREFORDSHIRE, not to be confused with the county of HERTFORDSHIRE. You will notice, after browsing the website, that the majority of the postal addresses are either 'via Hereford' or 'Herefordshire'. It is purely for postal reasons!

Directions from the East
Follow the M4 over the Severn Bridge to Junction 24 (Newport). Take the A449 and then the A40 to Abergavenny. Stay on the A40 until just after the village of Crickhowell, then turn right onto the A479 to Talgarth. From here take the road sign-posted to Three Cocks & Hay-on- Wye (A4079 end then right onto the A438), on reaching Three Cocks stay on the same road and continue on into Hay (B4350).

Alternatively...
Take the M40 to the outskirts of Oxford and then the A40 to Cheltenham and onto Gloucester, stay on the A40 around Gloucester and on to Ross-on-Wye. At the Wilton roundabout outside Ross take the A49 to Hereford. After passing through Harewood End take the left tuming for Hay-on-Wye (B4348). Stay with the B4348 and follow the sign posts for Hay.

Directions from Birmingham
Take the M5 to junction 8 and then the M50 to Ross-on-Wye. Then take the A49 to Hereford, after passing through Harewood End take the left turn for Hay-on-Wye (B4348) Stay with the B4348 & follow the signposts to Hay passing through Villages of Kingstone, Peterchurch & Dorstone.

If you're arriving from abroad, and would like to be picked up from an Airport, you could contact a local TAXI company in our business listing.

Also, Hay Ho! is a bus service which runs between Hereford Rail Station and Hay on Wye on Sundays and Bank Holiday Mondays. See website for more information.